If your site goes down quite often because of server issues, you need to have a look at Kinsta’s ultra high availability WordPress hosting arrangement.

Kinsta team made their new hosting environment public recently which will make sure that your site is up and running no matter what. That’s true, their three server arrangement will keep your site alive all the time.

After long months of testing we finally launched our newest offering to the public: a three servers based setup where all nodes are replicated (they’re exact copies of each other) in a master-master structure. As far as we know this is a world’s first in managed WordPress hosting! 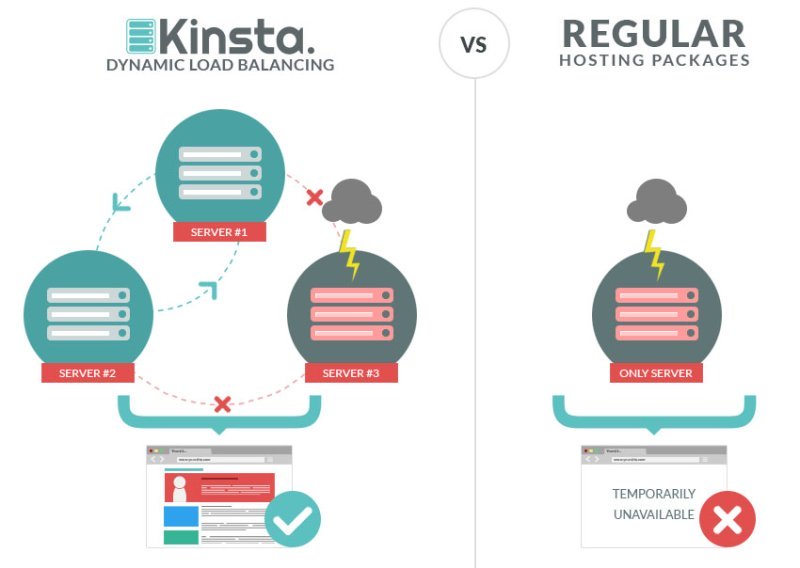 I’m sure, you got some idea about the new hosting arrangement from the image above. Well, now your site will be taken care by three servers vs single server in normal hosting services.

Now you can sit back and relax because even if one server goes down the other servers will keep your site up and running.

Can all the three server go down at the same time?

May be, but that will be a very rare scenario, as Mark explains that will usually mean a natural disaster- hurricanes, floods or worse.

If you want to know more about the technicalities & how the server will respond to support each other, you can read the announcement article on Kinsta’s blog

From general users point of view this is an important question, is the new three server arrangement good enough to handle traffic spike. You must have seen many site getting down because of sudden traffic spike, so how to handle that scenario?

There can be instances when your post lands on Reddit’s home page and suddenly you start getting thousands of visitors to your site and finally your server crashes because it is not well equipped to handle such heavy traffic.

Kinsta confirms that, with this three server arrangement by Kinsta you don’t have to panic even if your site gets featured on Forbes, because with the three server based load balancing system that your site will be online no matter what.

Conclusion: If you are running a serious online business, a few minutes downtime can have serious financial consequences as well as damage your brand value to a great extent.

Imagine the pick time when traffic is flowing to your site and your server goes down showing your visitors an ugly server is not available message, it’s really frustrating.

Now with Kinsta’s ultra high availability WordPress hosting arrangement, you can make sure that your site is up and running all the time.

The Network” package will cost you $387 a month which is a completely managed hosting service, the package will consist of: 6 CPU cores, 12GB RAM, 5TB data transfer plus 100GB CDN.